Where did they all come from? 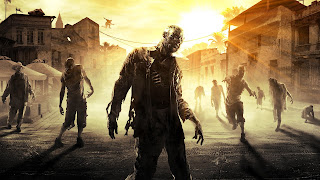 Do you remember the scene from The Walking Dead where Rick was trapped in a tank in Atlanta, the streets around him filled with Zombies? It seemed like they were everywhere.

I've read a number of Zombie books in the past, and a few of the scenes that really stood out for me were about overwhelming masses of Zombies creating veritable walls of rotting flesh through which the hero's were forced to venture. In one scene in particular a well equipped military force runs out of ammunition while killing an approaching horde of the undead, and still they came on.

At the risk of pissing off a legion of Zombie lovers I just have to say one thing.

Where did these hordes of Zombie come from?

I understand the need to fulfill the expectations of the readers of a particular genre, but the other day while watching The Dawn of the Dead a thought popped into my mind. I'm always getting these strange ideas, they just pop up on their own. And this is not intended to poke fun at anyone in particular.

Let's say for instance that we follow the original concept for the zombie apocalypse first proposed in George Romero's Night of the Living Dead. If I remember correctly during the course of the movie we are privy to a radio broadcast about the Earth passing through the tail of a comet. Which I believe served as the explanation for the dead waking up.

With this in mind, the recently deceased will be the first to wake up. Of course that means hospitals, morgues, and funeral homes would be the first attacked. Not sure if an embalmed body would reanimate, but let's add them as well.

We start out with a small population of the walking dead restricted to the aforementioned places, which in most cases are located in basements, funeral homes being one exception. Those who work in these places will be the first to succumb to the zombie horde, becoming Zombies themselves.

Now we come to the tricky part. How did the Zombies get out of the basement? I know, some may hitch a ride on an elevator and pop out on the first floor of the hospital, but in a situation like that I believe they would be quickly contained.

Of course I could be wrong.

If an event occurred that instantly turned ninety percent of the population into Zombies, a large percentage of them would be confined to buildings, houses, and vehicles, based on the time of day the event happened.

If a Zombie does not know how to operate a door.

How did they get out?

What are your thought on this?

How do you think they got out?

Email ThisBlogThis!Share to TwitterShare to FacebookShare to Pinterest
Labels: dawn of the dead, george romero, night of the living dead, the walking dead, zombies