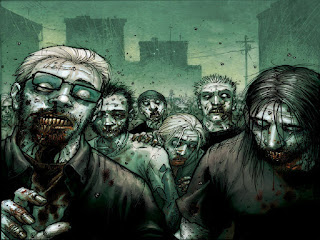 In All Roads Lead to Terror, and my up-coming release, The Reaping, Meat and his three friends Window, Einstein, and Billie-Bob are scavengers in a post apocalyptic world where nightmare creatures roam free. The story opens when the boys are aged eleven through fourteen.

But what happened when they were younger?


Beginning with Meat's birth at the start of the Zombie apocalypse. Each Wednesday I will add to the unfolding story, and when we've finished exploring Meat's past I will turn my attention on the other three. The following was written Monday morning, I have brief character descriptions for each character that will appear. Beyond that I know nothing else about what will happen. Every Monday morning I will write another 500 to 700 words to be shared on Wednesday morning.

I hope you're as excited as I am to see where this goes.

The contractions came hard and fast, doubling Denise over as she tried to cross the small living room to the window. It was too damned hot inside, and she needed fresh air. Marvin had already gone down to get the car, and bring it around front. Living in the city, while it had its benefits, meant one couldn’t always find a parking spot where one wanted.

He would be back up for her soon, that is if he remembered to come back for her. While Marvin had his uses, he wasn’t exactly the brightest bulb in the box. But that didn’t matter, once she got her payday she’d blow this crappy town and move north to a real city, like New York.

Focusing on her breathing she managed to get the pain under control enough to make it to the window. Pushing it up the rest of the way she was rewarded with a hot breeze that carried the pungent scent of the nearby river, an odor that spoke of things long dead.

Someone slammed into the door behind her, rattling it in its frame.

“Is that you Marvin?” she said, as she waddled to the door, her hand cradling her swollen belly.

She yanked the door open to find Mrs. Franklin, her neighbor from across the hall, lying on her doorstep.

“Mrs. Franklin,” she said as she struggled to get down on her knees next to the old woman. Mrs. Franklin’s walker was laying on the other side of the hall where it had obviously come to rest after her fall.

Denise shook her shoulder only to find her body stiff and rigid. She felt along her neck, not really sure what she was looking for, only that she had seen it done on television when a paramedic of someone checked to see if an unconscious person was alive. She knew with growing certainty that Mrs. Franklin was dead. There was just something about he way she lay there. Perfectly still, not even a breath stirring her body.

From the streets below came the sound of sirens and shouts, horns began honking, and alarms started going off. Bedlam had erupted and she worried for the first time about Marvin. Hopefully he’d remembered to feed the meter, she didn’t want to have to ride to the hospital in an ambulance, by the time they got to her the baby would be a toddler.

“Mrs. Franklin,” she said, louder this time, as if raising her voice would rouse the old woman from the other side. Leaning forward she looked first, left, then right. The hallway was empty.

Confident that no one was watching her Denise began digging through the pockets of Mrs. Franklins sweater looking for her door key. It was no secret the old bitch had a stash of cash somewhere in her apartment, which to Denise was just an added bonus to what she was already going to receive.

Several shots rang out from below and Denise ducked instinctively just as another contraction slammed into her, doubling her over. When she found out she was pregnant her first thought had been to go to the clinic and take care of the problem. She didn’t have the time or patience for raising a child right now.

A friend had introduced her to another friend who had arranged a meeting with a childless young couple looking to adopt. They had money, and when it was all said and done, Denise had agreed to surrender her child to the Mowerys for the tidy little sum of fifteen thousand bucks. That was enough to get her to New York and set her up for a few months until she was on her feet and starring in the latest Broadway play. She was still naive enough to believe her talent would be enough to land her the lead role for any play she auditioned for.

The Mowery’s had set her up in the apartment where she now lived, it might had been small, but it was better than the basement at Marvin’s parents house, or even, god forbid, her own parent’s place. Her mother had chided her ceaselessly when she found out she was pregnant. Telling her it was time to settle down and raise her family. Denise had other plans.,

As the pain of the contraction subsided she looked up to find Mrs. Franklin staring at her with cataract coated eyes that shimmered in the afternoon sun. She had turned her head at an impossible angle that briefly reminded Denise of  the movie, The Exorcist, that she and Marvin had recently watched on video. She couldn’t afford cable and the Mowery’s viewed it as a waste of money.

The flesh of Mrs. Franklin’s face had become a splotchy gray and her mouth hung open like a dog panting, her tongue lolling from side to side as drool dribbled from the corner of her mouth to stain the collar of her flannel robe. There was an animal like nature to her face that made Denise lean back away from the old woman. It was as if she were a ravenous dog looking at a piece of meat.

Suddenly Mrs. Franklin's arms and legs flailed against the door frame as she struggled to roll over, again her actions were reminiscent of an a dog struggling to jump to its feet,  and Denise scooted backwards on her butt.

Mrs. Franklin rolled over onto her belly, her gaze never once leaving Denise, and pushed herself up onto all fours. She continued to stare at Denise with those shimmering eyes, her mouth hanging open as a strand of saliva dribbled from the corner of her slack lips

“I’m sorry, please,” Denise said as the first feelings of panic stirred in the pit of her stomach. Mrs. Franklin moved towards her in a jerking gait, almost stumbling as she stalked her across the small living room. Denise crab walked away from her on her backside, using her feet to propel herself across the floor away from the old woman who paced her step for step.

“Not now!” Denise cried out as Mrs. Franklin reached out for her with a claw like hand and another contraction rippled across her belly. The old woman’s fingers latched onto her foot, digging into her flesh, pulling her across the floor towards her as Denise doubled over in pain.


To Be Continued!
Posted by Richard Schiver