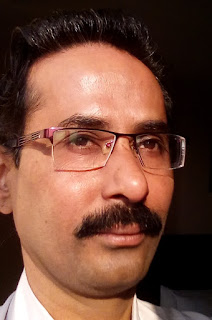 Kannan was born in a Tamil migrant family from Palakkad, Kerala. Born and brought up in Kanigiri, Andhra Pradesh, he spent his childhood climbing the mountain formed from single rock and swimming in the wells used for agriculture.

He became an engineer and is employed by an Aluminum manufacturer. He lives in Mumbai with his wife and son and leads a regular and boring life - which is why he started writing fiction.

A person with strong opinions but no expectations from life, he became a spiritual atheist after witnessing the aftermath of the Latur earthquake.

He spends his time mostly listening to music and playing chess online.

He can be reached at rkpthegod@gmail.com

A.) Though I started and stopped at least five books in the last nine years, it was last year I sat to write continuously - so that I can write a book, in real. Before that , all these five books were written about fifty pages or so, when I was in airport lounges or in guest houses – as I was traveling a lot in the last five years.

It was in my sister's house and my father was operated (angioplasty) over and was bedridden. I visited my sister's place to be with him, before taking him to live with me, after the ten days rest advised by the doctor.

We both were alone in the house through out the day as my sister and her family went to work or school. My father was on the bed and there I was, thinking all nonsense that one can think of. It was on the second day, I decided to write lest I'd become depressed in those ten days. And then I spent the next week or so, as if I am preparing a technical evaluation, which I do normally, while on job. By the time I moved with my father to my place, about three fourths of the book was written.

A.) The hardest part came after I moved to my place and was going to office. It was mostly midnight, when I started to write the last chapters. After the day's work, and to plan the climax – given the book is a thriller, it was hard for me to finish the last chapters. In fact, I delete what I'd written on the previous day, and it took more than a month to complete the book.

Synopsis:
"Peace and Violence complement one another and both are undermined without the presence of the other. Insecurity inspired by violence and devastation provides a business opportunity to those who live by selling killing machinery. When the war of thousand cuts could not bring India to the negotiating table, let alone concede defeat, Pakistan's ISI immediately grabs the opportunity to nuke India. However, the common legacy shared by both countries had many Indians in Pakistan who played a vital role in its establishment. How various nations respond to the purported nuclear attack intended to destabilise South Asia? At the centre of the plot is the defamed Qadar Khan—""Father of Pak Nukes""—who was a Muhajir. Will he try to nuke India, the country in which he was born, so that he can reclaim lost respect in Pakistan, his adopted country? What happens to the flamboyant general of Pakistan, Syed Ashraf Pasha, when his own Government denies any plot that he was executing through Qadar? Under international pressure from dollar donor countries, his family was arrested. Pasha, the man projected as future Army Chief, was labelled traitor. What would the patriotic army officer do in such circumstances? Who actually detonates the device? What happens in the aftermath?"

A.) Answering this question is probably tougher than writing the book itself. It was a feeling beyond expression. I was exhilarated – I guess that is the word that can describe the feeling.

A.) Getting up in the morning. Drop my son at school after coffee. Leave for office at about eight thirty and return by seven thirty or eight in the evening. Have dinner and play chess with my son or online. Read a book or watch a movie. A regular and boring life.