I've often wondered, usually late at night as I toss and turn while sleep eludes me, exactly where would I be today if I had spent the last sixteen years as focused on my writing as I am today.


I began writing earnestly in 1991, and over the course of the first five years of my writing life I amassed drawers of rejections as I followed the time honored route of submitting then moving on to the next story. In that time I managed to create about fifty short stories all in various stages of completion. I had about twenty that were making the rounds at any one time. If one were to have gone through the steadily growing pile of rejections they would have discovered a writer slowly honing his craft as form rejection letters gave way to personal notes from editors. 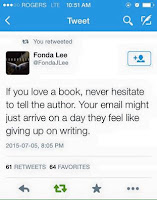 By 97 I had one novel ready for submission, with four others in draft stage, and began the long drawn out process of finding a publisher for my manuscript. I sparked the interest of a junior editor at Del-Rey books, a  division of Random House, who requested the first three chapters that I happily sent out the following day.

After a year and a half, that's right, eighteen months later I received a rejection along with my first three chapters.

By then I was closing in on my fortieth birthday. I lost my father when he was forty seven, I was eighteen when he died, and from that point on a countdown was initiated in my sub-conscious. While growing up I was always told that I looked and acted just like my Dad. So was it any wonder that on occasion I would be struck by the realization that I might never see fifty.

Looking back now, after having reached fifty seven and still counting, I can laugh at myself, but at the time it was serious business. Based on how long it took Random House to respond to my submission, and with an understanding of how the process worked, I might never see my work in print. 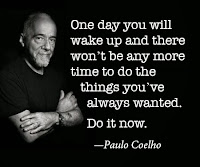 I believe it was this fear that drove me to be more open to self publishing when in 1999 I discovered a small start up called iUniverse. Get your book published for only $99.00. Before then the only way to see a print copy of your book was to have a publisher, or purchase an entire print run. With little time to spare, remember I'm now over forty, and without enough savings or room to store a print run I signed up.

It was a learning experience, and let's leave it at that. I will say I believe I made every mistake possible while publishing that book.

A year later, in 2001, it was all gone. Everything was lost in a computer malfunction that fried my hard drive. Seven novels in various stages of completion, eight screenplays, and an untold number of short stories. Ten years of blood sweat and tears gone in the twinkling of an eye.

I gave up, yes I surrendered!

I got a better job, bought a house, and tried to live like a normal person. But late at night, as I tried to sleep while the world was quiet around me, I'd often wonder if I had given up too easily.

In 2008 I hit the big 50, I had outlived that sub-conscious countdown. The housing bubble burst and suddenly I found myself in the unemployment line. I've always lived in an area with high unemployment, by choice, it's where my roots are, so it's really my fault I was unable to find permanent work for nearly two years.

In the time I was off I began writing again, building upon the foundation that had been laid in the early nineties. By the end of 2011 I had rewritten my first book and released it through Amazon. At the present time I have5 novels, 2 novellas, and a short story collection available with a whole lot more to come.

The two biggest regrets that haunt me to this day are.

#1: Not getting the schooling I needed when I first started out. I believe a creative writing course would have helped me solidify the path I'd chosen, and built a strong foundation upon which to build my writing career

#2: Not getting right back into it after I lost all of my work. Yes it would have been hard at first, but I would have gotten through it. This is also my biggest regret. Where would I be now if I'd been as focused on my writing as I am now?

So when you get that rejection from the publisher you'd hoped would fall in love with your work, always remember, you're not alone. All of us are following the same path you're on.

What are your regrets?

What bad writing decisions keep you up at night?

And how did you overcome them?

Email ThisBlogThis!Share to TwitterShare to FacebookShare to Pinterest
Labels: self publishing, the writing life, writers regrets