Till Death Do We Part: Part II 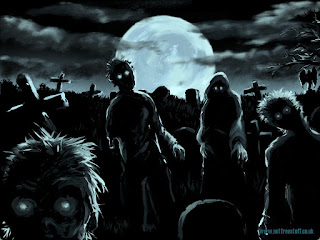 Though he has the skills to survive, does he have the will?

Part II
When there was no response, he hung up the phone and pushed himself to his feet. Moving from room to room, he looked out each window at the nightmare images that lay beyond. Something had happened while he slept and he felt the first nagging suspicion that he’d seen this before. Not in real life. But in a movie his daughter had insisted he watch with her at the theater. Something to do with the dead coming back to life and feeding on the living.

But that wasn’t possible. Dead was dead and the living had nothing to fear from them. On the east side of the house he watched through the picture window as Ginny, his neighbor down the street, hobbled across the field between their houses on her cane. Her face was a mask of terror as she struggled to outdistance her pursuers.

Eddie recognized one of the three people chasing her in a slow motion race she was destined to lose. There was Bobby from down the street. He had come around the neighborhood the year before, proudly displaying the Arrow of Light award he’d earned from the local Scout pack. With him were two strangers, adults, one dressed in the uniform of a Scout master, the other in a long dress. Bobby’s parents, he supposed, as he’d never met them. At the sight of the three chasing Ginny across the field, he was struck by an odd thought. The family that feeds together stays together. There wasn’t a creative bone in his body to account for this sudden insight.

Unable to look away, he watched helplessly as Bobby caught up with Ginny, who spun around and swatted at him with her cane. Bobby ignored the strike across the crown of his head as he reached out for her, catching her nightgown in one clawed hand, stopping her forward progress just enough for his parents to surround her. Eddie had to look away as they fell upon her. Closing his eyes to block out the sight,  he couldn’t completely block out the screams of agony that came to him through the double-paned window.

Holding his hands over his ears, he recalled his wife’s message, and on the black screen of his mind he saw her struggling to escape an approaching hoard of the undead.

Twenty-five years of standing on concrete, eight hours per day, five days a week had taken its toll. Rachel had to wear a brace on one leg in order to walk. It was physically impossible for her to run and the realization of what must have happened to her awakened a primal rage that boiled at the center of his soul. She had never done anything to anyone. She didn’t deserve to die like that. The rage sent him to his gun cabinet where he retrieved his thirty-ought-six deer rifle.

Back at the picture window, he opened one of the side windows and sighted through his scope at the three things he could no longer consciously refer to as people. They were hunkered over Ginny’s steaming remains. Bobby looked up, and Eddie imagined he could sense his presence on some primitive, instinctive level. Through the scope the features of his face came into sharp focus. Gone was the boyish innocence of a young child. In its place was an animalistic rage that twisted his features into a caricature of its former self. His once brown eyes were covered with gray cataracts that added to his sinister appearance.

Eddie gently squeezed the trigger and rode the recoil with his eye glued to the eyepiece of the scope. Bobby’s head exploded as the one hundred and eighty grain slug found its mark at the center of his forehead. Bobby’s mother and father looked around and died within moments of one another.

Breathing heavily, his ears ringing from the sound of the shots trapped in the living room, he watched as Ginny struggled to sit up. Sighting though the scope once more he zeroed in on Ginny’s forehead and quickly dispatched her.

Through the ringing sound in his ears he heard his phone, and he raced into the kitchen where he’d left it. He expected to see his wife’s name displayed, but what he saw awakened a cold ball of terror in the pit of his stomach.

It was Nathan, his oldest grandson.

Eddie pushed the button to accept the call and held the phone next to his ear. He heard a heavy breathing, a soft sobbing as Nathan cried into his phone. Nathan lived in the south side of town with his mom and her boyfriend.

“Paw, is that you?” Nathan’s terrified voice came through the receiver.

“Nathan, hey buddy, are you all right?” Eddie said.

“Where are you, buddy?” Eddie was clenching and unclenching his hand, that primal rage smoldering in the pit of his stomach. He grabbed the edge of the table so tightly the muscles of his arm stood out in sharp contrast.

“I’m in my bedroom. They’re trying to get through my door.”

“Is your door locked, buddy?”

Eddie could hear listless slaps against the door of Nathan’s room.

“I’m coming, buddy. You stay right there, I’m coming to get you.”

The connection went dead and he looked at his phone. He still had a full battery so either Nathan had hung up or his phone had died.

He didn’t know what to expect once he got into town, so with a pistol in his hip holster, and a twelve gauge pump shotgun slung over his shoulder, he stepped onto his back porch. From his other shoulder hung a backpack filled with ammo.

Brutus raced across the yard towards him, his hackles still raised, but his normally yellow coat was stained with blood. Eddie saw that his once-soft brown eyes were now clouded with gray cataracts and he leveled his pistol at his approaching form. The thirty-two caliber slug cleaved his skull and Brutus, driven by momentum, plowed nose first into the ground where he came to a stop with his hind legs still trying to push him forward. Eddie hated having to do it. He loved Brutus almost as much as he loved his wife; he’d been a faithful companion, and he didn’t deserve what had happened to him. His only consolation was the hope that Brutus would find peace in death and play for eternity with an unlimited supply of tennis balls.

Also available from these other fine online retailers.