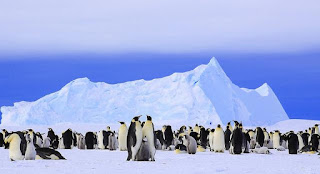 Some things are better left undiscovered!
Part V
Charlie silently followed her as she stepped across the threshold, and as she did a faint blue glow illuminated the center of the room. She stopped and stepped back, suddenly unsure if she should continue, and the blue light faded to darkness. Stepping forward again, she was rewarded with the return of that blue glow that seemed to emanate from the center of the room.
Following the beam of her flashlight, they both ventured deeper into the chamber, coming to a stone bench on their right. She played the beam of the flashlight over the dust-covered surface of the bench, noting how it curved to the left as it vanished into the shadows. There was another bench thee feet in front of the first, it too curving into the emptiness that pressed in on all sides. With growing confidence she pushed on, coming to a third bench in front of the second one.
As they ventured deeper into the chamber, she slowly became aware that the blue glow was coming from an object to her immediate front. She stopped, took a deep breath, and switched off her flashlight.
“Turn off your light,” she said.
“Are you nuts?”
“Just do it.”
Charlie complied and as her eyes adjusted to the darkness the blue glow grew stronger until she could make out the shape of a large blue globe hanging suspended an unknown distance before her. More details came into focus and she began picking out tiny spots of light high above her head all around her. The image reminded her of a planetarium during a showing and she suddenly realized that what she was gazing upon was the home world of whatever had built this structure.
“Can you see it?”
“See what?”
“Close your eyes for a minute and let them adjust to the dark.” Sandra closed her own eyes and when she reopened them that alien solar system was once again laid out before her with that faint blue sun in the center.
“What the hell,” Charlie said.
“I think that’s why they came here.”
“Who?”
“Those who built this structure. Their sun was dying.”
“What is it?”
“A star system, their home.”
“Aliens?”
“Of course, who did you think I was talking about?”
“How can you be so sure?”
“I’m not absolutely certain. Not one hundred percent. But the explanation fits.”
“Then where are they now?”
Sandra shrugged. “I don’t know.”
They had moved forward to a raised dais a foot higher than the rest of the floor. Stepping up together, they approached the blue sphere, beneath which rested a small white box. Charlie reached the item first, marveling at the craftsmanship that had gone into constructing this small object. It looked like fine marble cut into very thin sheets, somewhat transparent, its contents were a faint smudge against the white.
“What is it?” Charlie said.
“I don’t know.” Sandra touched the surface of the box and when she did her mind was suddenly filled with ancient images of an alien place that was all but a memory.
She saw a vast valley beneath a blue sun. From the floor of the valley rose an immense tower. The spires of Beizel in the valley of tears. The name came to her from the black depths of a consciousness that stretched into the antediluvian void of their past. She could feel them around her, the followers who had trekked to this desolate plain, and the faithful who had come to seek redemption. Their thoughts washed over and around her, a single voice in a seething populace whose movements were so perfectly timed they took on the appearance of the surface of the ocean as gentle swells raced from one end to the other in a continuous cycle.
They had come seeking salvation and found it in the singularity of one thought that washed through them with a solitary voice. The individual parts of the whole had come together to form a distinct thought, and that was survival of the species. Their sun was dying, the time for the planet, for their reign, had come to a close. But one chance remained, the survival of the species lay with the chosen who would reach out into the great beyond; to ensure the survival of the species they would venture into the farthest reaches of the cosmos in their search for a new planet to call their own.
Sandra stepped back from the box, her fingers numbed by the contact, struggling to catch her breath as the true meaning of what she had briefly seen began to sink in.
They did not belong here.
In the shadows around her their memories moved with a sinuous ease through the deeper night.
“Are you all right?” Charlie said, resting his hand on her shoulder as he stepped forward to look at the box resting on the raised dais.
“Don’t touch it,” she warned him. But he ignored her, reaching out to grasp the box in one hand as he softly whispered, “So beautiful.”
Before she could stop him, he had flipped open the delicate hasp and was raising the lid to gaze upon what the box contained. Sandra became aware of movement in the shadows all around her as that ozone aroma intensified. Her hair felt like it was standing on end in response to the suddenly charged atmosphere. Tentacles of darkness slithered across the dais towards them.
To be continued
Check out Adversary, book one of the Shadows of the Past series.