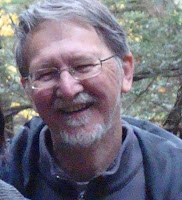 I am a husband, father, rabid backyard gardener, Boston Globe freelance writer, and blogger (prosegarden.blogspot.com) on nature, books, films and other subjects. My short stories, poems and creative nonfiction have appeared in numerous literary publications. I was named a Finalist in the Massachusetts Artist Grant Program in fiction for a story about my father (“Lost”).

My story "Marriage" placed in a fiction competition held by Words With Jam and was published recently in the anthology "An Earthless Melting Pot." Another story, "Love in the Other Place," was published in the latest issue of The Tishman Review. "Commitment" recently appeared in the debut issue of 3288 Review. My nonfiction story "Preparing A Place" was published last month in Lunch Ticket, and my short story "House Mates" is currently up this month (January 2016) on Scarlet Leaf Review.

My novel on the origins of the Sacco-Vanzetti case, "Suosso's Lane," was published in October 2015 by Web-e- Books.com.

As a contributing writer for Verse-Virtual.com, my poems appear there every month. Poems have also appeared recently in Guide to Kulchur Creative Journal, The Poetry Superhighway, Bombay Review, Earl of Plaid, Rain, Party, & Disaster Society, Semaphore Journal, Metaphor, and Scarlet Leaf Review. Some poems were also accepted for the upcoming anthology "Peace: Give it a Chance," and a collection of poems ("Gardeners Do It With Their Hands Dirty") will be published in 2016 by Coda Crab Books.

A.) In my twenties. I had just been fired from my teaching job (four different jobs in four years). I had no idea what I was going to do for a living, but I had been writing poetry for a few years and keeping one of those running self-consciously serious writer's journals, from which (I hoped) I would material for "stories" once I got around to writing them. I moved to Boston, then Cambridge, and became part of a self-publishing poets co-op. We published a tabloid newsprint poetry quarterly with our own work in it, gradually opening up to outside writers, and gave group readings in the Boston area. It was great to have something in print, but I was still not making a living.

A.) Getting published. I was determined to write novels. I pushed poetry to the side when I went to graduate school in English literature to improve my employability. I would finish a novel but couldn't find an agent or a traditional publisher, and self-publishing was looked down on then. I worked as adjunct faculty teaching English composition at various colleges and writing on the side, as we say, but resenting the time teaching and correcting papers took away from 'my own' work. Eventually, I switched to working for newspapers. Same deal. Except newspapers were way more fun than teaching, but they did not open doors for my creative projects. 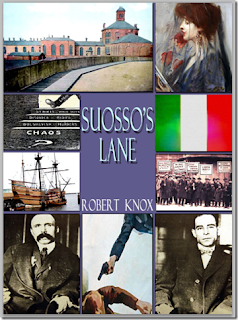 Synopsis:
Historical fiction, Suosso’s Lane dials back the clock to revisit the flawed trial of Italian immigrant Bartolomeo Vanzetti, a believer in "the beautiful idea" of a classless society in which all would work for the common good.

A sober-minded laborer, Vanzetti suffers from the exploitation of industrial workers in the early decades of the twentieth century. Outraged by the greed and injustice that mar his idealistic hopes for the "New World," he joins other anarchists in promoting strikes and preaching revolution.

In 1920, Vanzetti and his comrade Nicola Sacco are nabbed by police looking for radicals and subsequently convicted of committing a spectacular daylight robbery and murder. After seven years in prison, even as millions of workers and intellectuals around the world rally to their cause, the two men are executed.

Seventy years later, when a young history teacher moves into Vanzetti’s old house in Plymouth, Massachusetts, he learns of a letter that might prove Vanzetti’s innocence. But his search for the truth faces obstacles posed by a local conspiracy theorist, the daughter of Vanzetti’s lover, a shady developer, and a fatal fire set during his search of an old Plymouth factory.
3.) How did you feel upon publication of your first completed project?

A.)  It's hard to say what my 'first' was. My recent first was the accomplishment of that long-ago goal of publishing a novel. My novel "Suosso's Lane," published last October by Web-e-Books.com, takes off from the famous (and infamous) Sacco and Vanzetti case, which exposed American prejudice against southern and eastern European immigrants in the 1920s, especially Italians. Conventional wisdom said "ignorant, backward" Italians could never fit into American society. What does history say about that prediction? When that book finally saw daylight last fall I was ecstatic. I had pushed for years to find a publisher and rewritten it about a dozen times along the way. An earlier would-be publisher had collapsed before getting to my book. Writing and publishing that book was the water tower on my bucket list. I have a half-dozen other projects backed up behind it. Whether they'll see light remains to be seen. But one thing I know: I'm in print. And I feel like I earned it.

A.) What's important to me is voice. Somebody has to be telling something -- let's say 'story' -- in a compelling way. Somebody has to have something to say, and has to know how to say it. The writer, through whatever artifice -- first-person narrator or third-person omniscient or anywhere in between -- has to speak with authority, invite, seduce, or demand the reader's attention. And hold it by delivering the goods. You probably need both story and deep, complex, credible characters to do that job, but you don't get in the door, at least my door, without a tongue in your head.

A.)  Sleep late. Sort through email for the free-lance job I still do for the Boston Globe. Decide what I'm going to do that day to promote "Suosso's Lane." Write emails to possible sources of interest? Mail out promotional copies? See what social media forums such as Goodreads has for me? Then I write a poem or work on my current novel. I'm a contributing writer for an online poetry journal called Verse-Virtual.com, so I produce publishable work each month for that journal. I spend my days mostly in solitude, but they're not carbon copies. I grow flowers and vegetables in the growing season. Take walks in autumn. Go to the gym some days. Eat dinner and spend the evening with my wife. Go back to doing stuff like this after she goes to bed. I am mostly free, often quite happy, and still rather driven.
Posted by Richard Schiver