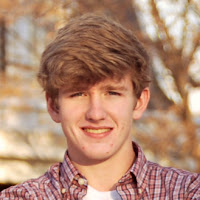 My name is David Duane Kummer. I'm a teenager, with a couple published novels and a collection of short stories.

I live in a small, river-town on the Ohio River in southern Indiana. Along with taking care of younger siblings (I have eight total), I make time for writing in between school and sports.

When I'm not writing, I enjoy talking with my hilarious friends and amazing girlfriend, spending time with my loving family, watching movies, and working out to burn all of the calories I get from binge-eating Hawaiian Rolls. Those things are really addicting, am I right? I'd rather get payed in those than money.

A.)  Well, when I was in early elementary school I already loved writing. By third grade, I'd had a copy of one of my "books" (actually a novella) printed professionally ten times, but it was never on sale. I had a brief hiatus from writing, then returned in May of 2015 to publish with Kindle Direct Publishing.

At first, I had no plans to make any money. I just thought it was cool. But with time I realized that you could legitimately make money off of this author thing. That's when the wheels started clicking and I hope to one day make a living off of writing books. (Funnily enough, since this realization sales have gone down. Fate is cruel.)

So, to answer your question, I got serious about June of 2015.

A.)  The hardest part right now is not getting discouraged when sales don't go how you had hoped. It's tough work, putting all those emotions and long nights into a book, only to have it not sell well. If I had to give advice to an indie author, it would certainly be: Don't get discouraged. Keep fighting.

The actual writing/book/words part, though, is leaving my characters behind. It's not the same with short stories, but even my novella My Abigail, which was only 20k words made me sad to leave behind those characters. It was especially tough with She, probably because of how that one ended.

They have grown strong in the shadows, the kingdom of Oldon. The land is void of hope and of strength against them. The human kingdoms grow corrupt everyday, so that the lines between good and evil are slurred.

One young man from a small village in the valley could change all of that. He fights with the passion of a warrior and the luck of a magician. And when the barbarians force him out of his home, the journey begins.

Trained by a knight, shadowed with secrets, and against the kingdom he once called home, Jonathan is an outcast, a rebel. But more than anything, he is a leader.

Enden is a world filled with wars, famine, sieges, torture, and death. But the greatest battle of all is to survive. Only one thing is certain. Something is rising, in the distance near the edge of the world where forgotten secrets brew. Something has risen. And it is coming.

A.)  When I published my first book officially in 2015 (see above), I was thrilled. Amazed. We immediately ordered 10 copies, and I set to work writing a full-length novel soon afterwards. Every time I publish something, it's a rush of adrenaline that keeps me going for weeks afterwards. There's nothing like it.

A.)  Character is, by far, more important to me. The story is what they do. Without them, there would be no story. They are the cause to the story's effect.

I strive to make my characters as familiar as possible, especially for myself. I want readers to relate to them. I pour myself into every one of them and try to entertain. Without them, I wouldn't have anything published.

A.)  Well, if we're going by weekdays, it's normally wake up for school (yeah, I still got that; I'm only in high school), go to either basketball or cross country practice afterwards depending on the season, and then come home and shower. I'll either work out or practice more, or I'll bypass that step and go straight to the computer. I'll stay on there until 11 or 12, read for maybe an hour, then go to bed and repeat the whole thing over again at 7 the next morning.
(Is that healthy? Probably not. That's why there are mangoes.)