Grab this one fast it will only be free for a short time.

The Zee Brothers have a strange and dangerous vocation. While some hunt rodents or pests in the dark, Jonah and Judas tackle much larger prey… Zombies. Equipped with a well-loved artillery gun, DeeDee, and a much used and somewhat abused pickup truck called Sasha, the duo clear the night of undead pests, keeping the ever present threat of a Zombie Apocalypse at bay.

When the slap happy pair receives an after hours call for extermination that ends in a gurgle, they head out, guns locked and catch pole loaded. It seems that an incredibly foolish developer built a high cost, gated community atop an old indian Reservation – a Reservation that soon became a graveyard and home to magic much older than the flimsy walled homes that tried to take over. Lost in this sea of new houses, an ancient artifact lay buried till the obnoxious Home Owners Association President disturbed it – and awakened the Zombies from their slumber to retrieve it.

Now it’s up to the Brothers to find it and lay the walking dead to rest. Along the way they meet the woman of their dreams, JJ, her magical and disco imbued dog, Xanadu, a denture wearing Zombie and a High Priest that offers a bit more danger than DeeDee can handle.

Filled with pop culture nods and heroes that just don’t know when to quit, it’s a slap happy, blood filled adventure, as the trio fights off zombies and the brothers fight each other for JJ’s affection.

If you like Ash Vs Evil Dead, Army of Darkness and Scooby Doo, you’ll want to buy this action packed romp and dive into The Zee Brother’s adventures today! 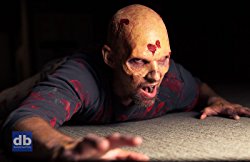 I take a look at ideas from different angles and write tales that I find interesting. What the heck is a zombie omelet? I didn't know either, until I started writing The Zee Brothers!

My characters tend to banter like eighties super-heroes, a sign of my childhood influence of comic books.

I tend to look for humor even when writing on a serious subject. Did someone just lose their arm? Perhaps we can use it as a weapon on the next page or maybe we try and put it back on because one of the characters once played a doctor during sexy time roll play!

Yes, sometimes its absurd humor, but if it gets you laughing than I've done my job!

My stories are often influenced by my real life events. The old axiom, "Write what you know" manifests to fill the pages.
Posted by Richard Schiver