Final edits are finished for Legion of the Damned. They have been formatted and uploaded to Amazon and Smashwords for distribution. I still have to format for the print version and that is the next project on my to do list. But before I move onto that I want to share the next part of my story in progress with you. 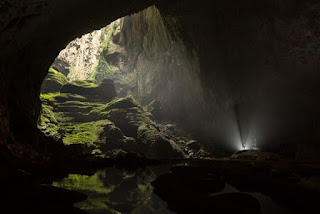 It was as silent as a tomb, and he shuddered at the thought that this might very well become his grave. In a perfect world they would do everything in their power to rescue him, working around the clock if necessary, unfortunately Tredwell was not known for expanding any more effort than necessary to protect its miners.


If the cave in wasn’t too bad they would put forth an effort to rescue him, on the other hand, and here he stopped this line of reasoning before it got too far ahead and the discomfort he felt blossomed into a full blown panic. There was nothing he could do but wait.


Turning off his light to conserve the battery he rested his head on his arms that he’d crossed over his knees, and listened to the earth around him as it slowly settled. The temperature was climbing, wrapping him in a suffocating cocoon of warmth.


Shaft 17C was so deep it was rumored that one had to be careful where they swung their pick for fear of knocking on the devil’s doorway.


Without ventilation the temperature hovered around one hundred and five. With the shaft blocked it was anybody’s guess how hot it would get. As the heat seeped through his heavy work coat he reached for his water. Luckily he’d brought several bottles, but he only took a small sip. As much as it pained him to do so, he knew it would be best to conserve every drop of water he could.


Turning on his light he looked around to take stock of his situation. The dust had settled as much as it was likely to, and he found he was at the face of the mine. The deepest part they had worked to, the stone around him scarred by the marks of their passage. Gouged out lines from the drills that bored into solid stone to set explosives for blasting.


Pushing himself to his feet he crossed to the collapsed section of the roof. Here a pile of stones blocked the entrance, filling the opening completely. Taking his hammer from the loop on his pants he beat on the face of the largest boulder. He stopped, and leaned in close, pressing his ear against the silent face.


Was that knocking? He wondered, or just an echo of his own pounding. He was certain he’d heard an answering knock on the stone, faint, almost imperceptible, he was sure it was there. It had to be there, to believe otherwise would lead only to death.


He knocked again, leaning in close to listen, and once more was certain he heard a faint knock answering his own.


They were coming. How long it would take was anybody’s guess, but they were coming to get him. He turned back to where he’d left his tool bag, and was halfway to it when the light on his helmet flickered briefly before going out completely.


The battery was dead.


He stopped, and tried to recall how close he had been to his tool bag. There was another battery in it, If he could get to it he could replace the dead battery. Carefully he dropped to his hands and knees, his eyes wide open, yet completely blind, as he carefully worked his way forward, reaching out with one hand to feel for his tool bag.


A thought emerged at the edge of his consciousness and he struggled to keep it at bay. Yet it persisted, blossoming into his mind like a deadly flower, with a cold clarity that made his knees weak and turned his bowels to ice water.


So this is what it was like to be buried alive.