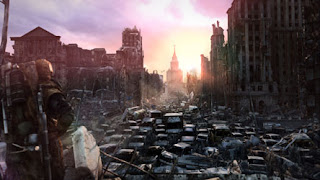 Kellen Richter survived the end of the world and the chaos that ensued. Now, he and a band of fighters will have to pull support from unlikely sources to prevent a familiar enemy from assuming control.

The final battle has begun. The warring factions will stop at nothing to destroy each other to seize control of what’s left of America.

Will Kellen and his friends maintain their freedom and find a way to live out their days in peace, or will the onslaught of power-hungry opportunists destroy everything?

The Blood Will Dry by Kate L. Mary

Five years after an alien invasion, the earth is unrecognizable. The human race has been decimated and the sun completely blotted out by dark clouds that bring constant rain. All indigenous plant life has been killed off and replaced by vegetation that has proven to be as deadly as it is invasive, and the aliens that have taken over the planet are seemingly invincible.

Living in a crowded building with other survivors, Diana Foster wants nothing more than to forget what she lost the day the aliens arrived. But an incoming platoon brings a familiar face, one that not only opens old wounds, but also forces her to deal with the painful memories she's worked hard to forget. Bryan may not be the same cocky kid he was before the invasion, but his sudden appearance still turns Diana's world upside down in ways she never expected. When he showed up she knew it would mean finally facing her past, but she never thought she’d find a future that was actually worth living.

After years of struggling to find a weakness in the aliens' defenses, Diana stumbles upon a solution just as a new and more deadly threat surfaces. Faced with an attraction she never expected and a battle that most believe can't be won, Diana must work through her painful past as the survivors mount a battle that may determine the fate of mankind. If her plan fails it very well could be the end of humanity, but if works it will mean having a real future, and a chance to allow the blood to dry once and for all.

Winter Smith The Secrets of France by J.S. Strange

A new world order, a city under control, and a new breed of zombie known as The Martyrs living alongside humans. France isn't safe. It never has been.

After fleeing from London, seventeen-year-old Winter Smith and her surviving friends learn that to survive in Paris means trusting those they don't know. An anti-government, known as The Union, are forming to take on V, a woman who has gained control of the world and has created the dead to establish a new world order.

But surviving in Paris is hard, as those who don't conform to V's new rules are quickly wiped out.

This not-so-typical zombie novel is the second instalment of the Winter Smith series. An action packed young adult horror that will keep you guessing, and wondering what could possibly happen next.

Kosar the thief senses that Rafe Baburn is no ordinary boy. After witnessing a Red Monk plunder Rafe's village and murder his parents, Kosar knows the boy needs his help. And now, for reasons he cannot fathom, others are seeking the boy's destruction.
Uncertain where to begin Kosar turns to A'Meer, an ex-lover and Shantasi warrior whose people, unbeknownst to him, have sworn to safeguard magic's return to the land of Noreela.

It is Rafe who bears this miracle of magic.

Now Kosar and a band of unexpected allies embark on a battle to protect one special boy. But horrific dark forces are closing in, and if they take magic for themselves dusk will fall forever.

Knight of the Wasteland by Jon Cronshaw

Finding hope in a hopeless world...

In a world ravaged by dust storms and poisonous rains, Abel has survived feral dogs, raiders, and drug addiction...but he’s done with just surviving — now, he wants to start living.

When Abel stumbles across a boy suffering from the same addiction that almost killed him, he takes the kid under his wing and offers him a new life...a life free from drugs.

But when a brutal drug gang comes after the kid, Abel must risk everything to keep him safe and end The Family’s reign of terror, or die trying.


This Friday I will begin the next short story titled with the letter C, thank you Robert for the suggested title, Covenant. Nice juicy title, now which way do I go.
Posted by Richard Schiver