E is for Everett Park

Read from the beginning HERE!

Authors Note:
With the recent events in Florida I was hesitant about releasing this part of our current tale. My heart goes out to those affected, and I feel your sorrow, your fear, and your rage.

When I start these stories I have no clue what direction they are headed. Each story begins life with an image in my mind, and this one was born from the image of an abandoned merry-go-round. With each successive week I've built upon the story, focusing on character as the story unfolds. This week I realized where the story was headed, and understood what the end would be, what the end had to be. I was bullied as a child so I understand what my characters are going through, and what has led them to the decision they have made. This is not revenge fantasy as I've come to terms with what happened to me and have spoken with my tormentor on several occasions.

In the end I decided that with all things considered my influence in these matters is minimal at best so why should I allow events beyond my control to determine what I write. The couple of you who have been following along might be disappointed if I let the story end here. And I don't want to disappoint anyone.

“Why can’t they just leave us alone?” Tina said as she clutched Sally to her chest. Her father had been able to fix her baby doll, but the head was still loose on her neck, and had a tendency to spin around into an unnatural position any time Tina moved. More often than not Sally would be watching what was behind her with those unblinking blue eyes, her head having spun all the way around. The sight of it was unsettling, it was as if the baby doll knew what was coming, and was keeping an eye out for us.

“They won’t, not unless we do something,” Jimmy answered.

At this Jimmy shrugged. What could we do? But he had an odd expression on his face, and there was something in his eyes that disturbed me. I watched him as he watched our tormentors walk away. At the time I thought I didn’t know what that might be, but looking back, even then I knew Jimmy was going to do something.

It was the three of us against the cruelty of our tormentors. In the beginning we had been five, but once Arnold targeted us the other two members of our little group, Ray and Terrance, decided to stay away from the playground. Had I known what was to happen I would have done the same. Or would I?

I doubt it. I think even then I suspected how things were going to play out. It was curiosity that kept me coming back to the playground. The day before it happened was a Saturday. School had recently started again, our summer break coming to an end, soon winter would descend, and the playground would be deserted as our interests turned to indoor activities.

The days were still warm, but the nights were growing colder, the memory of their passage trapped in the frosted grass of our lawns that took on a white mantle until the sun’s warming rays released each blade from its prison. Surrounded by forest the sun’s warming rays never touched the playground until it was high overhead, so mornings were only for the hardiest of our little group.

I was surprised to find Jimmy and Tina in their usual spots that morning, it was early and the air still carried a chill from the night before. The stood face to face, heads down, as they looked at something in Jimmy’s hand. I couldn’t at first see what it was but I suspected he’d brought something to equalize the balance of power on the playground.

Jimmy had always been the quiet one, hovering at the fringes of our little group, a part of the group, yet at the same time a stranger to us all. We knew he lived two streets over, but none of us had actually seen his house. I knew he went to the same school we did as we shared english class. But he always sat towards the back of the room, not all the way, he wasn’t one of those types who came to class simply to put in an appearance. He participated when called upon, but rarely volunteered.

When they saw me coming Jimmy hurriedly put away whatever it was he had been showing Tina. Together they turned to face me as I approached. Jimmy’s his face was as sullen as always. Tina’s eyes sparkled with excitement.

“He’s gonna show them who’s the boss today,” Tina said with a hint of excitement, Baby Sally’s head slowly spinning around as Tina swung her shoulder back and forth in a rocking motion. “He’s gonna teach them not to mess with us.”

“Show him,” Tina said as she nodded in my direction.

“I don’t wanna,” Jimmy replied, seeming to shrink into himself as he stuffed his hands into his pockets.

“Don’t tell my dad,” Jimmy said, looking up at me from beneath his brow, his head bowed as he pulled up the hem of his jacket, and withdrew a small black revolver. It seemed too big in Jimmy’s hand and I took a step back as Tina danced excitedly around Jimmy.

The sun was just starting to peek over the edge of the forest, the top half of Gigantica alight with its warming glow, but inside I felt a cold ball of fear form in the pit of my stomach. It had gone too far, too fast. Yet at the same time there was an electric anticipation coursing through my veins.

It was the first time I’d ever seen a real gun.


Book 3, Legion Of The Damned, will go on sale for 99 cents for the first time since publication beginning Friday February16 at 8am PST and will last until Sunday February 18 when the price will step up to $1.99 at 1pm PST. The next increase will take place on Tuesday February 20 at 6pm PST to $2.99.

Links for Legion of the Damned
Amazon US
Amazon UK 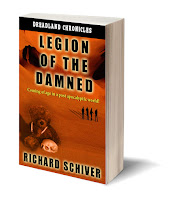